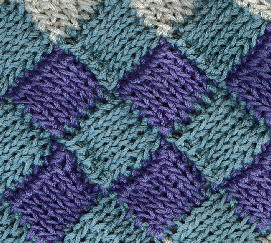 Angela Grabowski has been researching Tunisian Crochet for about 20 years and, along with Kim Guzman, is building a Tunisian Crochet database on the web. While I’d heard of ARNie through Ravelry, it wasn’t until I read a message in the forums there about her Tunisian research that I went to her website. ARNie graciously sent me a package with all her booklets and her Encyclopedia of Tunisian Crochet book (but that’s another review). I was most interested in the Entrelec booklet so here goes.

First off, the instructions assume you know how to do Tunisian Crochet as it is teaching the Crochet Entrelec technique, not Tunisian Crochet. The second to last page does provide some basic tips, such as what the Forward and Return steps are, hook placement, and working the last stitch in a row. The last page provides a Tunisian Crochet dictionary for a quick reference on the stitches used. Because of her research, some of the stitch names used may not be exactly what you were expecting, however, the dictionary will explain what the stitch is.

The instructions begin with the starting strip, then go on to building the blocks, filling in the Saw Tooth edge, making a squared corner, and making a rounded corner. The steps include detailed photographs with added notes and arrows as needed. Because the instructions are teaching ARNie’s entrelec method, she adds additional notes that you wouldn’t expect, such as what other techniques would tell you to do at this point, but either aren’t necessary with this technique or because she’s found or prefers a different method.

Before trying this technique, make sure you know the basics of Tunisian Crochet.  You should also read the stitch dictionary on the last page to become familiar with the terms used in the instructions.  Remember that Tunisian Crochet uses terms that are similar to both crochet and knitting as well as terms that are unique to this technique. The booklet is not a pattern book, so you won’t have a “finished” item when you are done; however, the techniques learned can be used when working any Tunisian Crochet Entrelec pattern (or knitted entrelec for that matter).